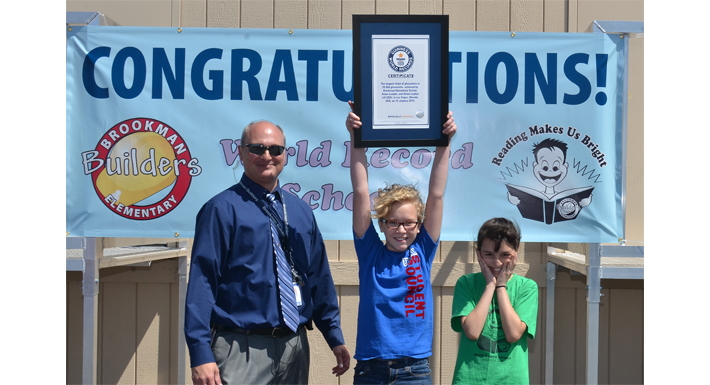 The celebration of a Guinness World Record at Brookman Elementary School on May 11 started with the drumline from Eldorado High School parading through the halls and concluded with hand-held confetti canisters being fired into the air. In between, the entire student body heard from various local officials who congratulated them for their record and the reason behind their record-setting attempt that took place in January. At the start of the 2015-16 school year, the staff wanted to encourage students to read more and increase their reading proficiency. The school partnered with Entertainer Adam London, who said he would purchase a glow stick for every book the students read. By January, the students had read more than 20,000 books and the world’s longest continuous string of glow sticks was put together to commemorate their achievement. In addition to reaching their goal, the students also became the first school in the state of Nevada to set a Guinness World Record. Pictured, left to right, are Brookman Elementary School Principal Darren Hall, Student Body President Anna Mennig and Student Body Vice President Celeste Gomez. For more information, click here.