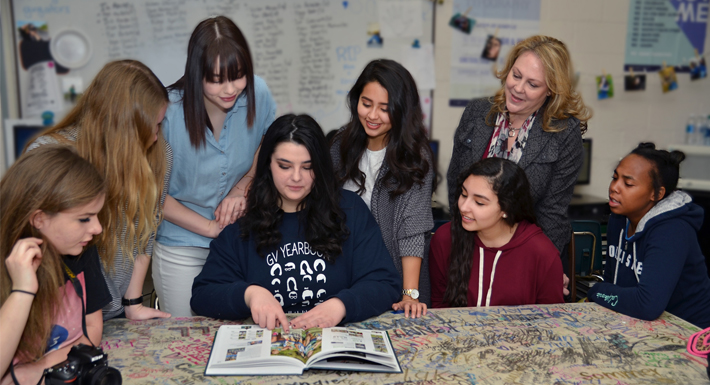 Julie Goldstein and Matthew LaPorte have a lot in common. Both are from Illinois and both are the yearbook advisers at their respective schools; Goldstein at Green Valley High School (GVHS) and LaPorte at Southwest Career and Technical Academy (SWCTA). But the similarities don’t end there. Both of their yearbooks have been named finalists in the National Scholastic Press Association’s (NSPA) 2016 Yearbook Pacemaker competition.

“The Pacemaker is the association’s preeminent award and is often called the Pulitzer Prize of scholastic journalism,” said Laura Widmer, executive director. “NSPA is honored to recognize the best of the best.”

The Howl’s staff is relatively small; just 10 students, all sophomores and juniors. The Legacy’s staff consists of 28 students in grades nine through 12. The NSPA said, “The yearbooks selected by the judges tell amazing verbal and visual stories and that content is packaged with dynamic design. The best yearbooks engage their student readers through extensive and inclusive reporting.”

The Howl’s 2016 edition consisted of 240 pages, and about 60 percent of the SWCTA students bought a copy. Legacy’s 2016 edition had 288 pages and about half the student body purchased a copy.

Despite the rising costs of yearbooks, neither LaPorte nor Goldstein believe printed yearbooks will ever be replaced by electronic versions. LaPorte said, “No one wants an electronic yearbook. They want to be able to put it on their coffee table or bookshelf and make it accessible for people to look at.” Goldstein echoed those remarks, saying, “People want something they can hold.”

While yearbooks of the past have followed a traditional coverage model of focusing on singular topics for each spread in the publication, the staff of The Howl follows a chronological approach, with each spread dedicated to a week of the school year. The Howl’s calendar begins with the first week of March and concludes at the end of February. “Our staff members want to ensure they are telling the story of the year in the way experienced by our students — week by week,” said LaPorte. “We love the chronological approach because the story is always fresh with the different activities happening on our campus and allows academics to blend with student life, rather than keeping them in separate sections. Plus, it’s cool to look at the way the year unfolded.”

Across town at GVHS, Goldstein said while her staff definitely “focuses on the product,” they also emphasize the importance of the process that’s used in producing the yearbook. She said, “This is a program in which students are committed and take ownership of the book. It’s not my book. It’s the students’ book. Everyone has to work together, and they take great pride in their work.”

LaPorte has a similar view of his yearbook staff. “They take their responsibilities very seriously. They see what they do as a service to the entire student body, and they give it 100 percent.”

The Pacemaker finalists will be recognized and the Pacemaker winners will be announced at the National High School Journalism Convention, scheduled for April 6-9 in Seattle.