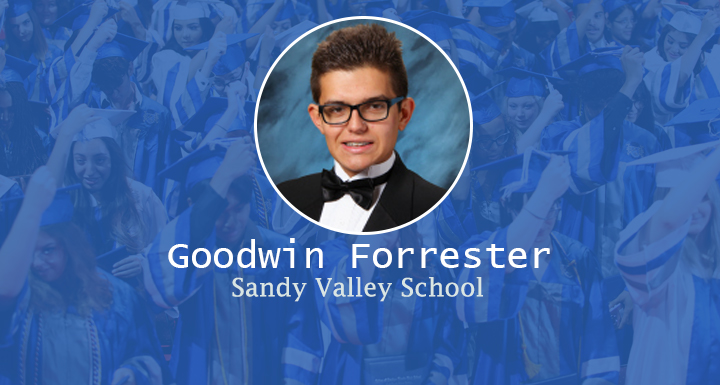 The story of Goodwin began seemingly with no future. Goodwin (“Goody”) was raised in a family with a mother suffering from mental illness and a father of many ailments that eventually took his life. In that life he was made to quit high school putting him 2 years behind peers. Forced to live a reclusive life of poverty, he withdrew from the world feeling hopeless and trapped with only his journal as his means to communicate.

In 2018 Goody and brother found a foster family and Goody began to believe in tomorrow.

For the first time in his life he began to explore and dream that all things were possible. With his new family he was shown the world. Of course the first thing was to re enroll him in high school. With an enthusiasm unmatched by many high school students, Goody embraced every opportunity to excel in his class work. It was soon apparent to his teachers, and counselors that Goody was a stellar student. He remains among the top academic high school scholars.

His new family learned of his dream to join the Navy, so they flew him to Annapolis, Maryland to interview and attend personal tour with the US Naval Academy. Now with eyes wide open he returned home to join the US Naval Sea Cadets. He dedicated weekends, starting at 4:30am in full uniform to attend training at Nellis AFB. During the summer he attended training in California on a Naval Base. His devotion paid off, Goody earned a Military promotion. When most recruits report to Basic Training they will be an E1, but Goody will begin as an E2.