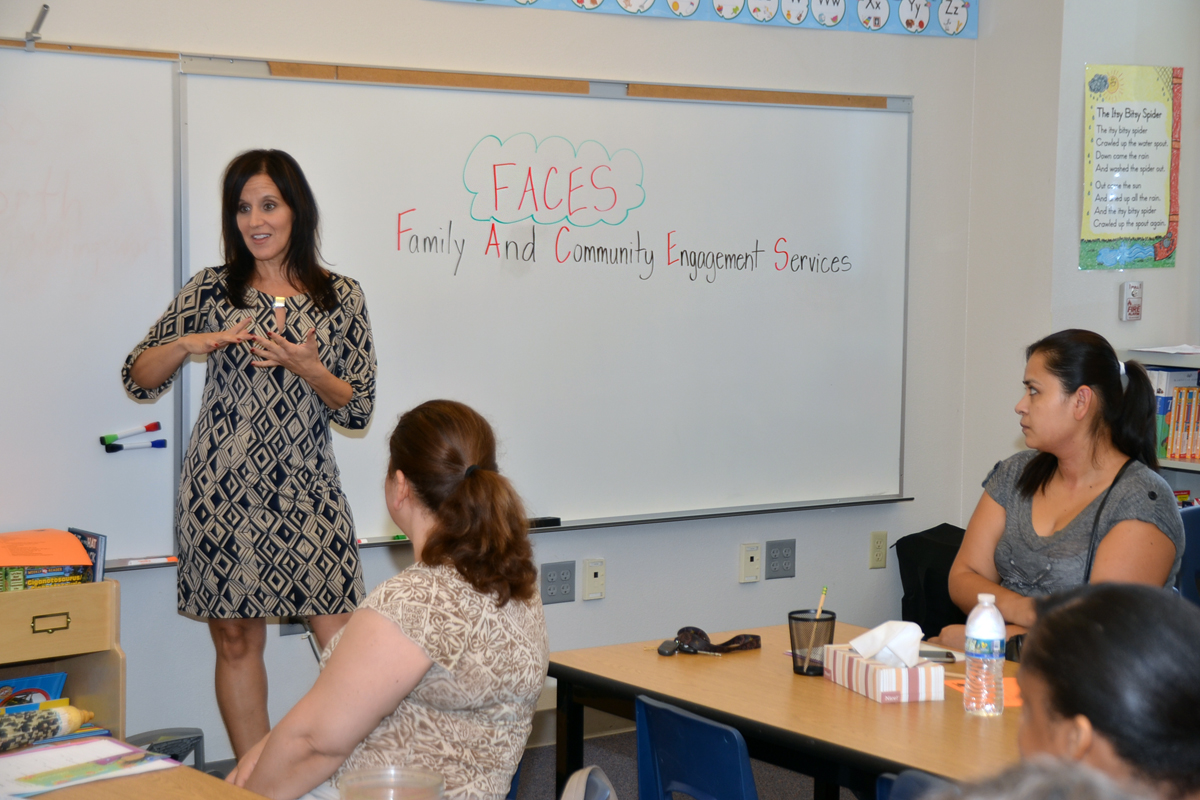 Being featured on the cover of the Clark County School District’s (CCSD) annual Back to School Reporter has resulted in some heartwarming and funny moments for educator Denise Georgi.

For the past 19 years, Georgi has been a teacher and project facilitator with CCSD and currently with the Family and Community Engagement Services (FACES) Department. She had no idea that the photo of her working with pre-kindergarten students during an early literacy class at Howard E. Hollingsworth Elementary School would be used in the publication, let alone on the cover, until she got a call from a colleague who told her she needed to immediately go online and look at the cover of the document, which had been posted to the CCSD website. She was surprised to find herself staring at her own image and as more people saw the publication, she started receiving texts and emails from other district employees who were happy and supportive of her place in the spotlight.

The funniest and most touching moments came from within her family, especially with her father and her own children. Georgi’s parents immigrated to the United States from Cuba and did not speak English when they arrived. However, they worked hard and made sure their children got an education. Denise became a teacher and her brother became a firefighter, so their parents have been very proud of what their children have achieved. Although her mother passed away several years ago, Georgi took a copy of the publication to her father and he was very touched by seeing his daughter on the cover.

However, on the humorous side, on the first day of school, Georgi got a text from her son who is a freshman at Foothill High School. He said, “I can’t ever get away from you.” Not knowing what he was talking about, she followed up and learned that at the end of the day, students were told to pick up a copy of their publication on the way out the door. He grabbed one, not realizing who was on the cover until a friend said, “Hey, this is your mom!” When she got home, her youngest child who attends Jack and Terry Mannion Middle School approached her with his copy and said he wanted an autograph and his friends wanted their copies signed as well.

Although the experience has been fun, there is an underlying message with the image. Superintendent Pat Skorkowsky has encouraged employees to “Make a Difference” in the lives of children and Georgi’s image fit the message, especially with her role of educating students and increasing parent engagement through the district’s FACES program.

For the 2015-16 school year, CCSD has established 12 Family Engagement Centers (FEC) at elementary schools around the valley. Georgi divides her time between the FECs at Hollingsworth and Elaine Wynn Elementary School. The goal of the program is to increase parent engagement so they can be more involved in the education of their child/children to help them increase their achievement.

The program has a profound impact on Georgi on a daily basis as she constantly works to break down barriers between families and schools, especially the language barrier. As a first-generation American, Georgi looks at the programs and services the district offers and thinks of how great it would have been for her parents to have had access to these resources when they arrived in Las Vegas and when she and her brother began their schooling.

“For me, it is a privilege to work with families to make an impact,” said Georgi. “We want to make sure the activities we provide will have an impact on academic achievement and the picture on the cover says it all as I am loving what I do.”