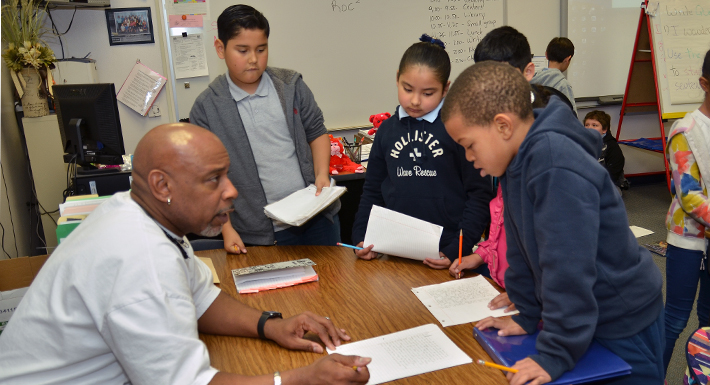 Looking at the eyes of a child who is behind bars or working with troubled youth in a juvenile correctional facility can change the course of a person’s life.

For two Clark County School District (CCSD) employees, their background in law enforcement and these types of experiences resulted in them switching careers to work on helping children before they get to the point of being incarcerated.

Eric Jordan is a third-grade teacher at Clyde C. Cox Elementary School. Long-time residents of Las Vegas may recognize that name as a member of the 1986 high-profile Rancho High School basketball team that won the state championship.

After graduating from Rancho High School, Jordan went into the military and in 1993, he started his juvenile corrections career with the Rite of Passage Program. After working at a correctional facility near Yearington for 11 years and the Summit View Youth Correctional Center in Las Vegas for four years, Jordan decided to make a change in his life.

During the 2015-16 school year, Jordan became a long-term substitute teacher and this year, he became a full-time teacher. His primary motivation to move from a career in law enforcement to working in an elementary school classroom was to be proactive with children rather than reactive.

Like Jordan, Mark McEwen is also a third-grade teacher who worked for the Metropolitan Police Department for 30 years before becoming a full-time teacher this year at Joseph L. Bowler Elementary School in Bunkerville.

During his 30 years with the department, McEwen’s duties ranged from being a detective and SWAT officer to serving as an academy trainer and as a DARE resource officer. For the last 16 years, McEwen was the Metro resource officer for Bunkerville.

Whether it was Jordan working with youth inside a correctional facility, or McEwen working in the homes of children and parents who had issues, both men have seen situations they wish they could forget. However, sometimes the worst of situations can prove to be strong motivators and now both of these former law enforcement officers are working to make a difference in their respective classrooms.

“I get so energized watching students learn,” said Jordan. “It is so rewarding when I walk into that classroom and that’s what keeps me motivated,” said Jordan, who operates under a pledge to be “Firm, Fair and Consistent.”

One of the highlights so far this year for Jordan has been working with a student who was struggling with math and was scoring in the low 50s a couple of months ago. Today, that student is now scoring in the high 80s.

McEwen also gets tremendous satisfaction in working with students and seeing them learn. His first experience with this came when he was working as the DARE resource officer in his home community.

“I want to be able to make a change and when I see their eyes light up at that moment where they get it – that light bulb moment, then that is what motivates me,” said McEwen.

McEwen said teaching is much more rewarding than law enforcement because it is about helping people rather than putting someone in jail. McEwen and Jordan would both like to be positive role models that help children to avoid becoming that set of eyes behind the bars.

Both men describe their first year of full-time teaching as filled with challenges and they admit it is not easy. However, their efforts have also not gone unnoticed as both of their principals have praised them for their work in the classroom and dedication to improving their school community.

“We are very happy that Eric chose to join the staff at our school,” said Principal Darryl Wyatt. “He begins each day with a strong sense of enthusiasm that sets the tone for the entire day. Eric is always positive, upbeat and serves as a good role model to our students.”

“Mark is very proactive in his approach and committed to instilling life-long habits in not only the students within his classroom but across the school setting,” said Principal Chris Jenkins. “I am thrilled with his presence and position at our school has expanded from a resource officer to a teacher.”