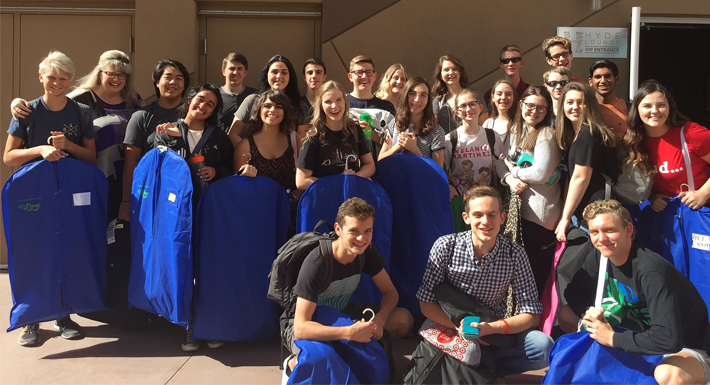 Two dozen members of the Green Valley High School (GVHS) Madrigals Choir got plenty of “satisfaction” from performing with the Rolling Stones on Oct. 22 at the T-Mobile Arena in Las Vegas. Mick Jagger and the Stones joined with the Madrigals on “You Can’t Always Get What You Want,” which was the first of two encores of the two-hour show. The Madrigals performed that same song back in 2013 when the Rolling Stones performed at the MGM Grand.

GVHS Choral Music Director Kim Ritzer said she was very proud of the Madrigals’ performance in front of 25,000 people. “I was so excited for them. It was just so awesome. Although the choir is made up of teenagers, they acted like professionals. It makes me proud to be their teacher.”

Ritzer said when the Stones go on tour, the choirs they choose to sing with them are typically college students or professionals. “We are the only high school choir they have used internationally to sing with them. It was quite an honor, a once-in-a-lifetime opportunity, to perform with them.”

Twenty-four of the 50-member Madrigals Choir were selected to perform at the Stones concert. After they sang during the dress rehearsal, Jagger and Stones guitarist Keith Richards approached the teens and thanked them. According to Ritzer, Jagger said, “Fantastic choir! Fantastic choir! I can’t believe they are in high school.”

Acknowledging that the Stones are from a completely different generation than today’s high school students, Ritzer said the Madrigals weren’t familiar with their music. However, she said they gained an appreciation for the legendary rock band after watching some of their videos.

A Las Vegas native and 1984 graduate of Bonanza High School, Ritzer started the Madrigals 26 years ago. She said it’s the “most select choir” at GVHS. “They do mostly a capella music, but they are the best of the best in my program so they get a lot of opportunities.” A total of 50 students in all high school grade levels comprise the choir.

It isn’t just pure talent that gets someone into this top-of-the-line choir. Ritzer said the students practice at school every day and also practice off-campus. They are also required to practice every night for at least 15 minutes. “I demand excellence because I feel there is too much mediocrity in the world. We always strive to sound better than the choir from the year before.” She added, “It’s all about being positive with them but also having really high expectations. The students rise to those expectations.”

This was by no means the Madrigals’ first performance with major recording artists. Ritzer said, “In 1994, we performed at the Jackson Family Honors show which featured Michael Jackson and the entire Jackson family.” The Madrigals also sang at two national conferences for the American Choral Directors Association, which Ritzer likened to the “Super Bowl for choirs.”

In April 2017, the Madrigals will be the featured choir at Carnegie Hall in New York City for the National Honor Choir. “We will do 20 minutes of our own music. This is a really big honor.” And it’s likely one of countless honors the Madrigals have yet to earn.