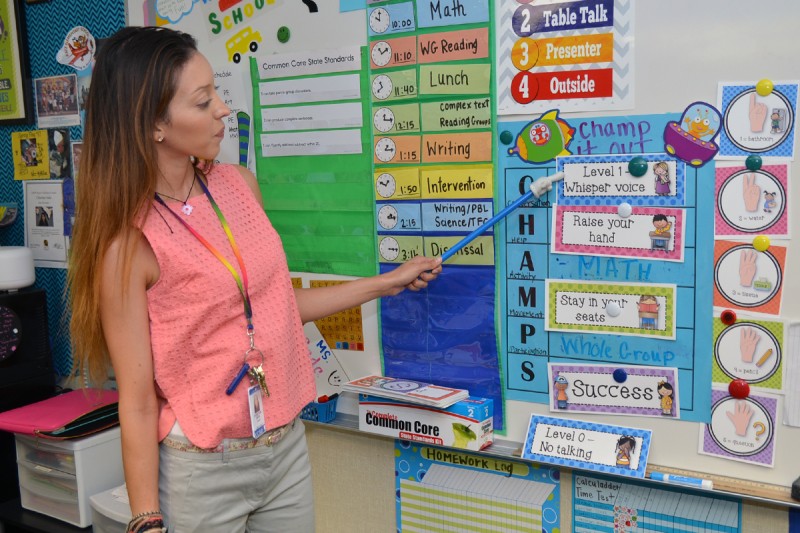 Posted at 18:03h in Employees, Newsletter by Cade Cridland

As a second grade student at Edythe and Lloyd Katz Elementary School, Christian Seda once sat at her desk and wrote, “I do not think it would be fun to be a teacher,” for one of her assignments.

Today, she smiles and laughs as she looks at the writing from about 20 years ago before she puts the booklet away and prepares her classroom for the students that will be entering in a few minutes.

For a child who thought it would not be fun to be a teacher, life has come full circle for Seda as she now teaches second grade at the same school she attended as a child.

The Clark County School District has received a tremendous amount of publicity for its efforts to recruit teachers from around the nation to address its shortage, but some of the best teachers are products of the same school district they attended as a child according to Seda’s Principal Kelly Reed.

“She’s a natural teacher,” said Reed. “Christian joined us last year in the middle of the school year and took over a new group of students, which can be a tremendous challenge for a new teacher. However, she took it upon herself to hold an open house for her parents and students. She got to know them and established relationships with them and she has been a great addition to our staff.”

Although Reed is very pleased with the teaching instincts and development of her second-year teacher, Seda’s path to becoming an educator was far from what would be considered a “traditional path” to the classroom.

“I always liked working with children, but I’ve had a variety of different paths in mind over the years,” said Seda.

When she started at UNLV, Seda began as a biology major and was thinking about becoming a pediatrician before she switched majors to focus on teaching. Upon graduating, Seda decided she wanted to do something different. Seda traveled to England, where she did her student teaching and tutored. Upon her return to the United States, she worked as a homeschool teacher and tutor. However, when the students she was homeschooling moved out of state, her mother, who works at nearby Linda Rankin Givens Elementary School, told her that there were vacancies at Katz due to their tremendous growth in students.

Seda initially thought she would work for the district as a long-term substitute, but after meeting with Reed for her interview, she decided to become a full-time teacher and she is thrilled with the opportunity to return to the school filled with her childhood memories.

“Returning to this school has been an inspiring experience. I can walk into a classroom and remember when I was a student and we were reading the Harry Potter books, or I can walk by our quad and remember playing in there,” said Seda. “I also remember what it was like to be a student and I look at the children in my classroom and think that someday, one of them might be a teacher at this school and that motivates me even more. I love seeing these kids with a smile on their face and that they are excited to see me and learn. When I see that, I know I am doing a good job.”