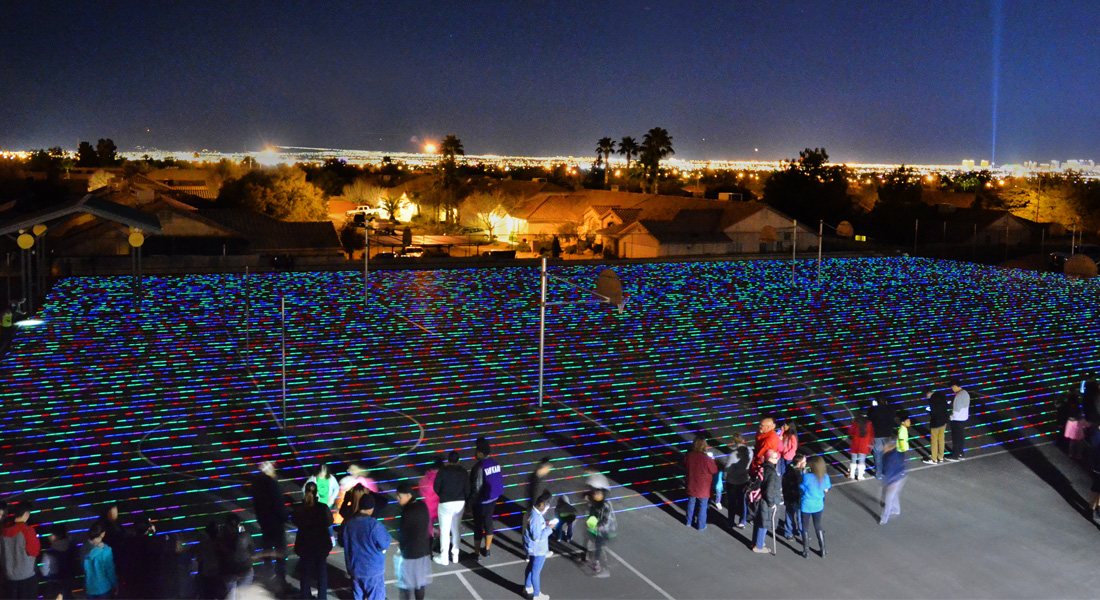 Hundreds of Eileen B. Brookman Elementary School students and parents were joined by members of the Clark County School District Board of Trustees and district officials on Jan. 15, to literally “light up the night” to celebrate the school’s students surpassing its goal of reading 20,000 books in a semester.

This ambitious effort began at the start of the school year, when fourth-grade teacher Alana London issued a challenge to students that also contained an incentive. For each book a student read and tested at better than 80 percent comprehension, they would receive a glow stick, which would then be used in an effort to set a new record in the Guinness World Record Book. The glow sticks were provided by London and her husband, Comedy Magician Adam London, who has the Laughternoon show at The D Hotel and Casino in downtown Las Vegas.

The students not only reached their reading goal, but surpassed it as they read more than 21,000 books. However, once the students neared their goal, plans needed to be finalized to make the celebration an extra special occasion.

Staff and students alike were excited not only about the achievement, but the notoriety they would receive in their efforts to make their mark with a world record.

“If our students can break a world record today, I am excited to see what they will accomplish in the future!” said Alana London.

Prior to lighting up the glow sticks, Trustees Kevin L. Child, Chris Garvey and Patrice Tew, as well as Superintendent Pat Skorkowsky, congratulated the students on their achievement and encouraged them to continue their efforts to increase their reading and comprehension skills.

Principal Darren Hall fired up the crowd during the ceremony by saying, “The world record isn’t going to just be broken today, it will be shattered.” Hall thanked the students for their efforts and parents for their support. “Every single student at Brookman contributed to setting the world record,” said Hall. “In 15 weeks, our students read over 21,000 books and 42,700,000 words!”

Those in attendance then moved outside where the 20,000 glow sticks had been placed end-to-end forming a giant zig-zag across the playground, setting a new world record. The previous record was 9,800 glow sticks held by a school in Australia.

As the sticks were lit, the playground wasn’t the only thing glowing as both of the London’s faces were aglow with satisfaction of having sponsored the challenge and the cost of the setting the world record.

“Laughternoon was thrilled to be a part of this world record attempt,” said Adam London.

The overall effort to improve reading and comprehension skills is one of the cornerstones of the superintendent’s efforts to increase student achievement as improved reading skills help students in other subjects.

The “Reading Makes Us Bright” initiative falls within CCSD’s Pledge of Achievement and the “Read by Grade Three” program to increase the number of students in kindergarten through third grade who are reading at or above grade level.